Nancy V. Ibarra
Amazing Stem
Bio:
Nancy is a 7th and 8th grade CPS science teacher who has been teaching since 1999. She strongly believes that social justice issues should not be left out of the classroom. She wants her students to know that they have the power and responsibility to make positive changes in their community and in the world around them.
​
Narrative of Amazing Teaching Moment:
The lesson I presented to my seventh-grade life science students addressed the Flint, Michigan water crisis. I began by showing them a short video clip explaining the problem. After that, I gave them a handout of a water quality science experiment conducted by scientists from Virginia Tech. As a whole group and using a graphic organizer, the students read the study and determined the hypothesis, independent, dependent and controlled variables, data collected and conclusion. I wanted my students to understand that the scientific process is something that is actually used in real life applications and has value in the scientific field.

We learned about the high corrosivity of the Flint River water and what could have been done to prevent the lead from leaching from the pipes. We looked at several factors that went into making the decision to change the water supply from the lake to the river and how the social-economic status of the customers may have allowed Flint to happen. We followed by drawing political cartoons that represented the Flint water crisis. As a culminating activity, we went to the Peggy Notebaert Museum and took a workshop titled H2O Investigations. Here, they looked at macro-organisms to determine the quality of the river water sample.

This lesson had several amazing moments. The first was when we were able to take an ongoing present day experiment and apply it to the scientific method. The second moment was watching the students come up with a political cartoon that represented what they had learned about the Flint crisis. I never would have imagined the high level of understanding and higher order thinking skills that creating a political cartoon would take. Lastly, watching the students high level of engagement in the water quality lab at the museum was impressive. 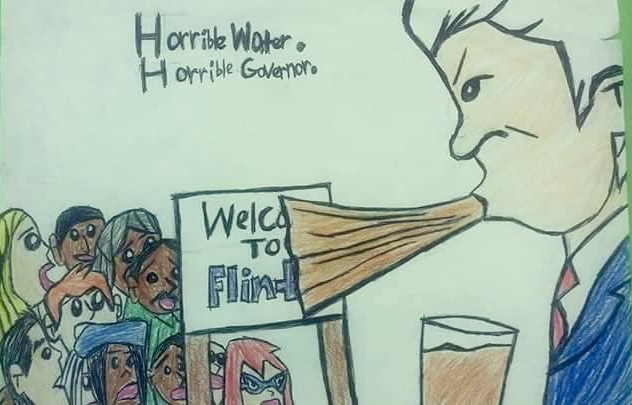